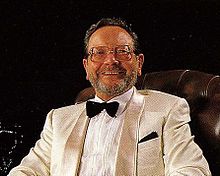 One of this composer's most famous film scores! Opening with three groups of snare drums sounding a relentless tattoo, an insistent and ominous theme in the basses joins in creating a feeling of suspense and drama. Building to a rousing call to adventure, this is a film score unsurpassed in setting the mood and ominous atmosphere.

Where Eagles Dare is a 1968 British World War II action film from Metro-Goldwyn-Mayer that stars Richard Burton, Clint Eastwood and Mary Ure. It was directed by Brian G. Hutton and shot on location in Austria and Bavaria.

In the winter of 1943–44, U.S. Army Brigadier General George Carnaby, a chief planner for the Western Front, is captured by the Germans when his air transport to Crete is shot down. He is taken for interrogation to the Schloß Adler, a mountaintop fortress in the Alps of southern Bavaria, accessible only by cable car or helicopter. A team of seven Allied commandos, led by British Major John Smith of the Grenadier Guards and U.S. Army Ranger Lieutenant Morris Schaffer, is briefed by Colonel Turner and Admiral Rolland of MI6. Disguised as German troops, they are to parachute in, enter the castle, and rescue General Carnaby before the Germans can interrogate him.