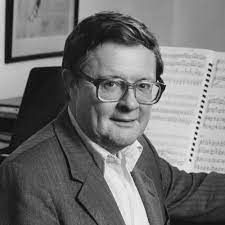 Raised in Nebraska, Dr. Ross became a professional orchestral French horn player by the age of seventeen and went on to gain more performance experience in college as a member of the University of Nebraska symphonic band, and as a flute player with a baroque ensemble. After four years of engineering and astronomy, he switched to music, receiving much of his early compositional training under Robert Beadell. While working on his doctoral degree at Cornell (where he studied under Robert Palmer and Karel Husa), he received an Organization of American States fellowship to study composition privately under Alberto Ginastera in Argentina.

Ross joined the music faculty at the University of Virginia in 1967.

His compositions are for chamber groups, orchestra, and band. Ross, whose works have been performed in over 40 countries, is perhaps best known for his compositions featuring brass and woodwinds. He wrote a number of major orchestral concertos, including ones for oboe and harp, bassoon, clarinet, piano, flute and guitar, trombone, tuba, double bass, and violin. He preferred the concerto form to that of the symphony because of its more varied possibilities for artistic expression in contrasting the solo against the orchestra.

The influences of his own extensive performance background and his musical training under composers who stressed bright orchestration and rhythmic excitement can be heard in many of Ross' over one hundred works. Many of his later works are representative of his interest in neo-modal, pandiatonic composition.

Dr. Ross received a number of awards and prizes and many significant grants and fellowships. He served as president of the Southeastern Composers League and as a judge at international composition symposia. He had been a visiting composer at the Aspen Music Festival and a featured composer at several universities and forums and on national and international radio broadcasts, and a member of the board of the Capital Composers Alliance.