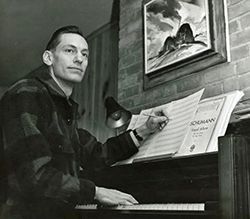 Finlayson studied at Ithaca College, Columbia University, and the Juilliard School of Music. His professional career included not only work as a composer and an arranger; he was also a professional artist. Among his artistic endeavors were the cover illustrations of many training piano pieces published by Boosey & Hawkes.

He was also a music educator and retired as chairman of the music department of Katonah-Lewisboro School in 1974. Finlayson wrote quite a few works for band and did extensive guest-conducting, especially of the band of the U.S. Military Academy at West Point.

Finlayson was known especially for his marches Storm King and Thunder Song.