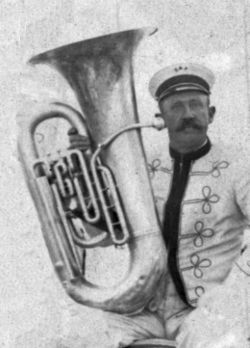 He was born in Salt Lake City, Utah Territory, in 1867. He grew up in Dallas, Texas (Smith) playing tuba in various bands. In 1891 he joined the circus band on the Great New York Circus in Oakland, California (Smith). In 1892 he joined the band on the McMahon Circus (Smith). During the next three years he traveled with circus bands on Howe & Cushing, Sands & Astley and Harris Nickel Plate Shows (Smith).

He played tuba in Carl Clair's band for the European tour of Barnum & Bailey's Greatest Show on Earth at the turn of the century (1897-1903). He took up the conducting baton from an ailing Carl Clair in 1907. In 1909 he played for Norris & Rowe (Smith). English spent three years with the Sells-Floto Circus. In 1913, he played tuba for The Girl of Eagle Ranch production, thereafter rejoining Sells Floto (under the baton of his friend Karl King). King and English subsequently co-authored a march, Howdy Pap. In contrast to the tall, thin King, Walter English was rather stout, and he wore a walrus mustache. King later recalled that the first time he met Walter English was when English invited him to his hotel room. Walter English loved cats, and the room was filled with music paper and cats.

The remainder of his life he played with assorted circus and concert bands, including Frederick Neil Innes' Denver Concert Band, and died in Denver, Colorado in 1916.

In 1984, English was elected to the (Circus Band) Windjammer's Hall of Fame.