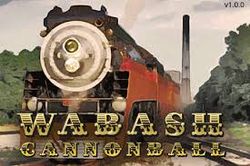 The Wabash Cannon Ball was a fast express train line on the Wabash, St. Louis, & Pacific Railroad. This express train traveled throughout the middle and western United States and also, on the Great Rock Island Route in the late 1800's and into the early 1900's.

As early as 1882, sheet music titled The Great Rock Island Route was credited to J. A. Roff. A rewritten version by William Kindt appeared in 1904 under the title Wabash Cannon Ball.