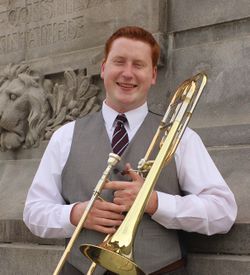 Wigilia is an annual gathering and feast that Polish families of the Roman Catholic faith celebrate on Christmas Eve to commemorate the birth of the Christ Child. It is a solemnly celebrated occasion that arouses deep feelings of kinship among family members. I can speak to these “feelings of kinship” personally, as my family has celebrated Wigilia my entire life. My Polish heritage and the tradition of celebrating Wigilia in my family can be traced back to my great grandmother, Jadwiga Hattie Malinowski Bandru. From mother to daughter, Hattie passed down her knowledge of Polish heritage and culture to my grandmother Alice, with the tradition of Wigilia as one of the most important cornerstones of preserving their link to their Polish kin.

The largest way I have strived to preserve my Polish heritage is through my research of Polish folk music and tradition, which resulted in the creation of a brand new wind band piece that I named after the beloved Christmas eve tradition, Wigilia. Each of the five movements of Wigilia draws aspects of Polish folk music from three major sources: the many Polish folk regions, folk dances and folk traditions.

The first movement of Wigilia, entitled The First Star, is a regimented polonaise drawing regional aspects from the central west area of Great Poland. In accordance with Polish folk tradition, the holiday event of Wigilia does not commence until The First Star can been seen in the eastern sky. Within the composition itself, I tried to capture the youthful excitement and jovialness of family members gathering together after a long journey to eat and be merry under the light of the stars.

The second movement, entitled Prayers of Oplatek, is set as a Polish Christmas carol called a Kolenda that draws regional aspects from the western area of Silesia. Oplatek is a traditional Christmas wafer that is specifically baked for the holiday event of Wigilia. In accordance with the traditions of Wigilia, each family member breaks off a bit of the wafer, says a prayer or a well wish towards their family, and consumes their piece. Within the composition, I attempted to capture the reverence and sacredness of this tradition as family members pray together and share their innermost wishes for the people they care about most.

The third movement of Wigilia, entitled the Feast of Sea & Field, is a fiery mazurka that draws regional aspects from the east central area of Mazovia. The main tradition of Wigilia is that of a great feast, comprised of some of Polish folk culture’s most scrumptious delicacies. Due to huge variety of delicious Polish dishes, I attempted to capture that vast diversity within the different sections of the third movement of Wigilia, as well as the sheer elation and eagerness of eating some truly amazing cuisine.

The fourth movement, entitled Gift Giving, is a lush Kuajwiak drawing regional aspects from the northern area of Pomerania. In accordance with Wigilia tradition, the children are the first to open their gifts, and are then tasked with distributing the rest of the gifts from around the Christmas tree or choinka. Of all the traditions of Wigilia, the time of Gift Giving is the most sentimental and intimate part of the evening festivities.

In accordance to Polish folk tradition, once the last of the gifts have been opened, family members exchange goodbyes and the great Polish folk event of Wigilia typically draws to a close. However, in my immediate family, we always celebrate one of our own personal traditions of Wigilia by reading the great holiday tale The Night Before Christmas, before we head to bed. Entitled Christmas Stories, the final movement of Wigilia encompasses this adopted Davern family tradition, featuring the musical folk elements of the folk region Little Poland and the brisk Polish folk dance, the Krakowiak.

Despite all of these characteristics and aspects regarding Polish folk culture that have been preserved through the ages, I have come to the conclusion that what gives Polish folk music and tradition its “national uniqueness” is its ability to simultaneously preserve its most important fundamental qualities while constantly transforming and adding upon these established hallmarks. To quote the great Polish ethnomusicologist Anna Czeckanowska, she states, “It is a vision of culture that has been created against a background of varied historical, social and religious traditions while being integrated and transformed into a unique quality which must be identified as being clearly Polish.” This line of thought encompasses the essence of both the composition and holiday event of Wigilia itself, combining traditional aspects of well preserved folk strata with that of newly added cultural and musical aspects that hopefully will be celebrated for many Wigilias to come.

Wigilia: Polish Folk Suite for Wind Band was completed in 2019 and premiered on January 29th, 2019, at Graduate Lecture Recital of Shawn W. Davern by the James Madison University Symphonic Band, under the direction of the composer.