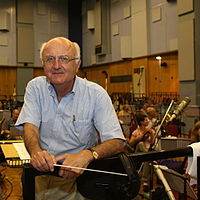 Vladimir Cosma ( b. 13 April 1940, Bucharest, Romania) is a French composer, conductor and violinist.

His father, Teodor Cosma, was a pianist and conductor, his mother a writer-composer, his uncle, Edgar Cosma, composer and conductor, and one of his grandmothers, pianist, a student of the renowned Ferruccio Busoni.

After receiving first prizes for violin and composition at the Bucharest Conservatoire of Music, Vladimir arrived in Paris in 1963 and continued his studies at the Conservatoire national supérieur de musique de Paris, working with Nadia Boulanger. As well as for classical music, he discovered early on a passion for jazz, film music and all forms of popular music.

Starting in 1964 he made a number of international tours as a concert violinist and began to devote himself more and more to composing. He wrote various compositions including: Trois mouvements d’été for symphony orchestra.

In 1968, Yves Robert entrusted him with his first film music for Alexandre le Bienheureux. Cosma has since composed more than three hundred scores for feature films and TV series. Vladimir Cosma received two Césars for the best movie score, for Diva (1982) and Le Bal (1984), two Golden Sevens for the best music for television, as well as a number of prizes and awards in France and other countries.

Film music allowed him to approach and develop many different musical styles: jazz, original compositions inspired by folk-music, as well as classical music

He is dedicated to re-writing his film music with the intention of conducting performances in symphonic concerts, thus approaching a wider audience than at the cinema