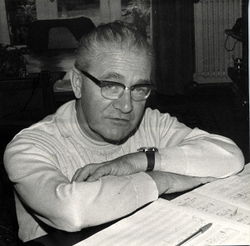 Legley received his first music lessons - in viola, harmony and counterpoint - with Lionel Blomme in Ypres. In 1935 he began his full-time musical education at the Royal Conservatory in Brussels, where he earned first prizes in viola, chamber music, counterpoint and fugue. From 1936 to 1948 he played viola in the Symphony Orchestra of what was then the NIR (National Broadcasting Corporation).

On the advice of fellow violist Gérard Ruymen, he began to take lessons in composition with Jean Absil in 1941, a study that was rewarded in 1943 with the Second Rome Prize. After the war he played in the orchestra of the opera in Brussels and in the Déclin Quartet, in which he became acquainted with the music of Bartók and Schönberg. In 1947, he became a programmer for the NIR, and then advisor-department head for 'serious music' and for the third programme of the Flemish radio broadcasts. In this function, he attempted to promote contemporary music and Belgian composers in particular.

From 1948 to 1950 he was a teacher at the Municipal Conservatory in Leuven. In 1949 he was named professor of harmony at the conservatory in Brussels and in 1956 professor of composition and analysis at the Muziekkapel Koningin Elisabeth. He held both functions until 1979. In 1965 Legley became a member of the Royal Academy of Belgium and was its chairman until 1972. He was also the author of numerous articles for the proceedings of the Royal Academy for Sciences, Letters and Fine Arts of Belgium.

Legley was chairman of SABAM (the authors' rights association) from 1980 to 1992, and of the Union of Belgian Composers from 1986 to 1990. He has also often served as jury-member or chairman at international competitions, such as the Queen Elisabeth Competition, the Verviers International Competition of Lyrical Song, and the Bösendorfer-Empire International Piano Competition. In 1986 he was appointed officer of the Order of Leopold. The Vrije Universiteit Brussel granted him an honorary doctorate in 1987. In addition, he has received a great many prizes and distinctions, both for specific works and for his complete oeuvre. He has also represented Belgium at various foreign festivals and new music conferences.