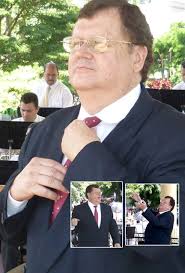 Victor Hugo Berrocal Montoya (b. 19 February 1947) is a composer and conductor from Costa Rica.

Known as “Periquín”, Berrocal has developed considerable repertoire with popular orchestras and ensembles in his country. He has also composed for concert bands, including soloist concerts for trumpet and band, clarinet and band, flute and band. He is the former director of bands in San José and Limón, Costa Rica.