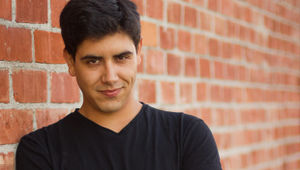 Vicente Ortiz Gimeno (b. 1987 Spain) is a Spanish composer.

Ortiz was born in a musical family and his father, Vicente Ortiz Diago, was his main teacher and mentor. Taking advantage of the concert band system from Valencia and his studies at several conservatories, Vicente earned a Degree in clarinet performance from Castellón Conservatory (Valencia, Spain). Besides his regular instructors, he attended masterclasses with numerous renowned clarinetists in Spain and USA, like David Howard (University of South California), Gary Grey (University of California, Los Angeles), Michelle Zukovsky (Los Angeles Philharmonic), Pascal Moragues (Orchestre de Paris), Harry Skoler (Berklee College of Music), and others.

From a young age, he started to be interested in composing, especially for concert band, and he enrolled in the Castellón conservatory to study composition, while serving as a clarinet and music theory instructor. After several years teaching in Valencia and Badajoz schools of music, he decided to move to Boston to study Film Scoring and orchestral conducting at Berklee College of Music, having been awarded a full scholarship by the Sociedad General de Autores y Editores. At this point, his symphonic and concert band music enriched enormously and his compositions were touched by the jazz and film-scoring flavor. At the same time, his music was recognized in several national and international contests in Spain and USA, wining the “Ciutat de Llíria” International Composition Award and the Millican Composition Award and the Berklee Composition Competition, among others. During his last months in Boston, Vicente served as a core music tutor, teaching harmony, counterpoint, conducting and ear training individually to Berklee students.

He has received several commissions for concert band and his music has been selected as the mandatory pieces for the traditional concert band contests in Castellón, Valencia and Alicante, being performed as well in important concert halls such as the Berklee Performance Center, Jordan Hall (Boston, MA), Palau de la Música de Valencia or “L’Auditori” at Valencia Opera House (Valencia, Spain). Publishers “Rivera” and “Tot Per l’Aire” were interested in his music and currently it can be purchased through these publishers.