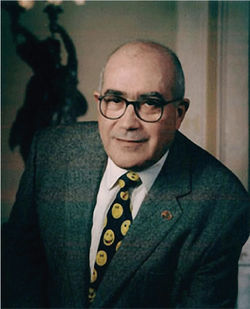 Vicente Moncho (b. 1939, San Juan, Argentina) is an Argentine composer and violinist.

Moncho was a professor of music history, harmony and composition, instrumentation and orchestration at the Universidad Nacional de Córdoba. He organized, between 1982 and 1986, the Jornadas de Música del Siglo XX. In 1987, he was coordinator of the 33rd World Congress of the Jeunesses Musicales. Between 1995 and 2001 he was a board member of the World Association for Symphonic Bands and Ensembles (WASBE).

In 1994, Moncho won the composition competition of the Consejo Argentino de la Música; in 1999 he received the Grand Prize of the SADAIC in the category of chamber and symphonic music; in 2001 he won the Argentine Music Critics Prize.