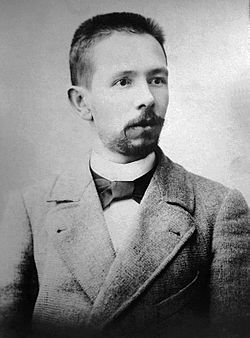 Vasily Kalinnikov (13 January 1866, Orlov, Russia - 11 January, 1901, Yalta, Ukraine) received musical training at the Orlovsky Seminary, where he directed the choir. He received a scholarship to attend the Philharmonic Music School in Moscow. He tried to earn a living by playing bassoon, timpani, and violin in theater orchestras, but he was unable to afford tuition and had to abandon his studies.

Tchaikovsky was impressed by Kalinnikov’s skill and secured for him an appointment as conductor of the Italian Opera in Moscow in 1893. However, he was forced to relinquish the position after just a few months, because he was stricken with tuberculosis. He moved to the relative warmth of South Crimea (a peninsula of Ukraine), where he continued composing, and was able to complete his two symphonies and many other works. He died at a very young age just two days before his 35th birthday.

Kalinnikov's reputation was established with his First Symphony, written between 1894 and 1895, which had great success when Vinogradsky conducted it at a Russian Musical Society concert in Kiev. Further performances swiftly followed, in Moscow, Vienna, Berlin, and Paris. Its themes are characteristic of Russian music, and it remains in the Russian repertory, with his place in musical history there secure.