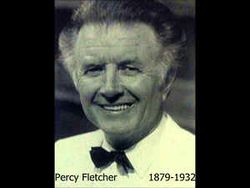 Vanity Fair is a concise and refreshing overture that is a wonderful example of Fletcher’s light melodic style and first-rate scoring. Described by the composer as “a comedy overture in which several characters from Thackeray’s novel are portrayed,” the fast-slow-fast, single movement form includes three main thematic ideas. The opening vivace A section features a vigorously energetic melody that is permeated with scales, sequences, repeated motives, and a variety of color. The second theme, in the dominant key of F, is somewhat slower and delightfully pompous in character. The highly romantic middle section, now in D-flat Major, showcases a beautiful melody complimented by exquisite scoring and is to be played “with sentimental expression.” A transition leads to the return of the opening vivace theme with some variety of harmony and scoring. The stately second theme, now in tonic, leads to an extended and electrifying coda that gains tempo and places the highest technical demands upon musicians, particularly the upper woodwinds.

Vanity Fair, one of those uniquely remarkable pieces that is immediately revered by audiences and musicians alike, was first published by Hawkes and Son in London in 1924, and was later transcribed for orchestra. The aim of this edition is to not only make this decidedly precious work available to modern concert bands, but also to elevate it to its rightful position among the standard wind repertoire.