Up to No Good 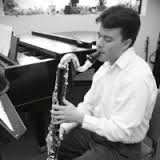 Instrumentation (one player per part)

Though in its modern form the bass clarinet is a flexible and lyrical instrument, it was first popularized in many romantic orchestrations as a harbinger of melancholy. This somber role came to influence many of the early uses of the bass clarinet, and Berlioz even describes Wagner’s writing for the instrument as always displaying a “character of solemn resignation.” The twentieth century introduced a more liberal use of the instrument’s abilities, but the solemn character assigned by Wagner still influenced much of the literature, which expanded to include sinister or comical roles for the instrument in programmatic works.

This traditional “dark” character is referenced and realized primarily in a capricious form in Up to No Good. The material is presented in three movements, and in each instance the bass clarinet soloist manages to “corrupt” the other players by influencing the musical material and goading the wind ensemble into a reaction. The overall formal structure supports this approach by featuring the first movement as a kind of prelude (or dare) that is eventually accepted and addressed in the third movement. This is referenced in the subtitle for the third movement by a phrase often used by my brother when issuing a personal challenge –- “I hope you brought your woodscrews ...”

Up to No Good was commissioned by a consortium including: