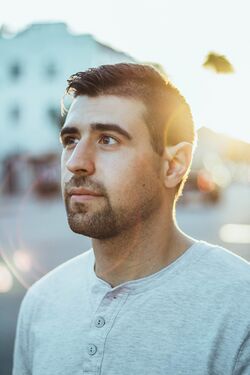 Tyler Eschendal (b.1993, Detroit, Mich.) is an American composer and percussionist.

A fascination with adapting sample-based procedures found in electronic music to acoustic and live instruments heavily influences his music. An obsession with deconstructing source materials and exploring malfunction within the western classical canon fuels much of his work.

Tyler's music has been performed at institutions across the U.S. including Indiana University, George Mason University, Boston University, Manhattan School of Music and internationally at Soochow University in China. His compositions have been showcased at the Percussive Arts Society International Convention (PASIC), American Composers Orchestra (ACO), and Contemporary Commissions Project, among others.

Recent projects include the music video premiere of Clapping Between the Movements for speaking percussionist, and a commission from Dutch ensemble Orkest De Ereprijs as the grand winner of the 2019 Young Composers Meeting.

Mr. Eschendal is an active recording engineer and videographer in Los Angeles, and lecturer in music technology at Chapman University.