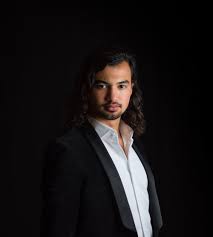 The title translates from the Spanish as Your Eyes.

Tus Ojos (Your Eyes) is Anthony León’s first compositional endeavor, in which he has set to music the poetic words of his grandfather, Luis Alfonso Bolivar.

The world premiere of Tus Ojos was performed by Anthony Leon and the La Sierra University Wind Ensemble in Prague, Czech Republic, and later performed in Tulln, Austria and Rome, Italy.