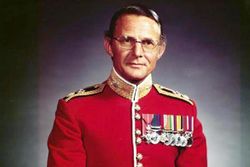 Born in Canterbury, Kent, England the son of an officer in the Royal Marines Tank Corps, Sharpe began his own military service as a bandboy at age 14, playing clarinet, in 1935. He attended the Student Bandmaster Course at Kneller Hall (1945-1948), and upon graduation was installed into the Worshipful Company of Musicians. In June, 1950 he was appointed Bandmaster of the Buffs (Royal East Kent Regiment). In September, 1959, Sharpe was posted to the Royal School of Music, Kneller Hall as School Bandmaster. On leaving the Buffs, he was awarded the MBE for his services to music. He was promoted through the ranks an eventually assumed command of the band of the time-honored Coldstream Guards, the oldest continuously serving regiment in the British Army known for their high-profile ceremonial duties.

His many honors include Lieutenant of the Victorian Order (LVO, 1978) and the Order of the British Empire (OBE, 1976).