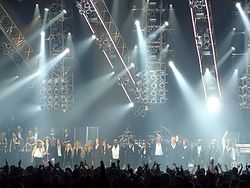 Trans-Siberian Orchestra (TSO) is an American rock band founded around 1993 by producer, composer, and lyricist Paul O'Neill, who brought together Jon Oliva and Al Pitrelli (both members of Savatage) and keyboardist and co-producer Robert Kinkel to form the core of the creative team. The band gained in popularity when they began touring in 1999 after completing their second album, The Christmas Attic, the year previous. In 2007, the Washington Post referred to them as "an arena-rock juggernaut" and described their music as "Pink Floyd meets Yes and The Who at Radio City Music Hall."