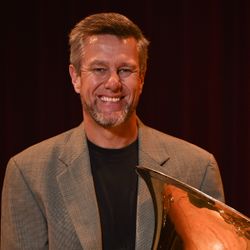 Tony Zolincik (b. 1 March 1967) is an American composer, educator and tubist.

Tony Zilincik teaches tuba at Capital University in Columbus, Ohio, as well as composition and theory. He is an expert in the areas of music composition, improvisation and tuba performance.

Mr. Zilincik is in demand as a tuba and band clinician throughout Ohio and Michigan. A prolific performer, he plays the tuba in the Central Ohio Symphony Orchestra, the Capital Brass quintet, the Cathedral Brass quintet at St. Joseph Cathedral in Columbus, and directs and coordinates Merry TUBACHRISTMAS Columbus. He is also the E-flat tuba soloist with the Brass Band of Columbus and has performed with the Columbus Symphony Orchestra as well as many touring Broadway shows.

Also a prolific composer, his works have received performances in the United States and Europe. Zilincik is known for his commitment to presenting new music in different ways. In 2012, he joined 200 other musicians to perform his Tower Thunder in an 80-foot-tall tower at the Olive Ranch in Geyersville, California.