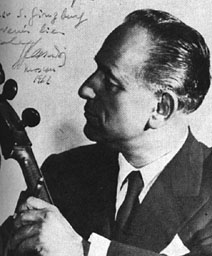 This work first appeared as Girolamo Frescobaldi’s Toccata in a collection of six pieces for cello and piano by Gaspar Cassadó. Hans Kinsler, the conductor of the National Symphony Orchestra at the time, recognized the potential of the Toccata and had it transcribed for orchestra. It was published by Mills Music in 1942 with the note “Freely transcribed for orchestra by Hans Kindler.” It was later transcribed for band by Earl Slocum for his University of North Carolina band in 1956. In a letter dated 3 April 1989, Slocum admitted “I have known for years that Frescobaldi was not the composer. I kept this to myself, only telling a few friends. I give Dr. William Newman, my colleague at UNC, credit for uncovering the real fact.” For many years, countless conductors, musicologists, and arrangers had doubted the authenticity of the Frescobaldi Toccata. In December 1968, the Duke University band opened a concert with Toccata; the program notes attributing the score to Cassadó. After many years of research, Robert Halseth concluded that “despite the apparent opportunism on the part of Cassadó, Toccata remains an appealing and interesting work.”

Cassadó wrote a number of works “in the style of” various composers. However, somewhere along the Toccata’s dubious route, Girolamo Frescobaldi (1583-1643) became the ad hoc composer of the work. It’s compositionally “romantic” allusions finally gave it away. Only in recent years has the toccata been rightfully attributed to Cassadó.