To the Edge of Space 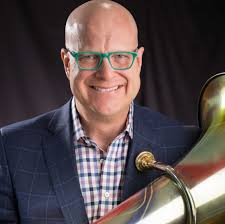 To The Edge Of Space was commissioned by Captain Donald Schofield and the USAF Band of Mid-America in May 2005. Imagine our surprise when asked to write a ‘concerto grosso’ for the Four Star Brass tuba-euphonium ensemble and band… in a funk style!?!

A few minutes later the curtain parted and our mind moved started to unfold. The USAF is constantly pushing the envelope of human potential and technology in a search for the edge of space. Equally adventuresome is the task give the Four Star Brass as they are propelled to the frontier of what is possible for low clef dwellers. The edge? The fringe? A low brass section turned into a FUNK MONSTER!

In a tempo reminiscent of the great James Brown and His Fabulous Flames’ In a Cold Sweat, the soloists are catapulted into the funkosphere as the world’s largest five-string bass guitar. They trade riffs, breaks and solos in a collective cadenza that represents a funkified sound map of the Milky Way.