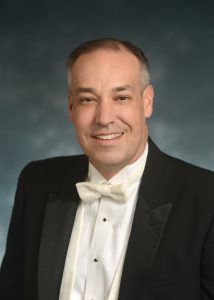 Timothy B. Rhea (b. 18 June 1967, Ashdown, Ark.) is an American conductor, composer, arranger and educator.

Dr. Rhea is a graduate of the DeKalb (Texas) High School, and grew up in the music programs of the Texas public schools. He earned a Bachelor of Music degree with honors at the University of Arkansas. He earned a Master of Music in Wind Conducting degree at Texas Tech University, where he studied with the late James Sudduth. While there Rhea served as assistant conductor of the University Symphonic Band and graduate assistant conductor and musical arranger for the 400-member Texas Tech University Marching Band. In May, 1999 Rhea earned a Doctor of Musical Arts degree in Wind Conducting and Composition at the University of Houston.

Dr. Rhea was named conductor of the Texas A&M University Symphonic Band in 1995. He has led this band in performances at conventions of the Texas Music Educators Association, the College Band Directors National Association, and the American Bandmasters Association. He has led the band on several tours throughout the state of Texas, and on a tour of Europe. He was appointed Texas A&M University’s Director of Bands on June 1, 2002.

Rhea was named the Outstanding Young Bandmaster of the Year for the state of Texas at the Texas Bandmasters Association Convention in San Antonio, in July, 1999. In December, 2000, Rhea was awarded the President’s Meritorious Service Award by Dr. Ray Bowen, former president of Texas A&M University. Dr. Rhea is also noted as a successful composer and arranger. For more than ten years he has been active as an arranger for public school and university marching bands, and has been the recipient of a number of commissions for original concert works for band.