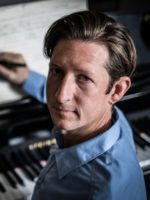 Till MacIvor Meyn (b 1971, Cologne, Germany) is an American composer and educator.

Meyn enjoys composing pieces in a wide variety of genres, from chamber to orchestral, choral to band. His music has had international performances in Switzerland, France, Italy, Cuba, China, Spain, Ukraine, and Slovenia. Performances of his music in the United States include those at Carnegie Hall, Clarinet Fest, the Biennial Saxophone Congress, The Florida State University Festival of New Music, the Society for Composers, Inc. National and Regional Conventions, National Flute Association Conventions, the College Music Society National Convention, at the Manhattan School of Music, and at the Intercollegiate Men’s Choruses National Seminar at Harvard, among others. Till is often commissioned to compose new works, most recently for the Fort Worth Symphony Orchestra, The Woodlands Chorale, and various chamber ensembles and professional soloists. He was a finalist in the Areon Flutes Commissioning Project for 2016, was a featured composer at the 2015 Cliburn at the Modern series; a finalist in the NFA Newly Published Music Competition for ‘Urban Ragas’ (2013); and he earned first prize in the NACUSA Texas 2011 Composition Contest for Celestial Mechanics.