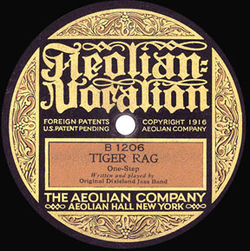 Tiger Rag is a jazz standard, originally recorded and copyrighted by the Original Dixieland Jass Band in 1917. It is one of the most recorded jazz compositions of all time.

Even before the first recording, several musicians had achieved prominence as leading jazz performers, and several numbers of what was to become the standard repertoire had already been developed. Tiger Rag and Oh Didn't He Ramble were played long before the first jazz recording, and the names of Buddy Bolden, Jelly Roll Morton, Bunk Johnson, Papa Celestin, Sidney Bechet,King Oliver, Freddie Keppard, Kid Ory, and Papa Laine were already well known to the jazz community.

Other New Orleans musicians claimed, however, that the tune or at least portions of it had been a standard in the city even before. Some others even copyrighted the same melody or close variations on it under their own names, including Ray Lopez under the title Weary Weasel and Johnny DeDroit under the title Number Two Blues. A number of veterans of Papa Jack Laine's band said the tune had been known in New Orleans as Number Two long before the Dixieland Jass Band copyrighted it. In one interview, Papa Jack Laine said that the actual composer of the number was Achille Baquet. Punch Miller claimed to have originated the cornet & trombone breaks with Jack Carey, and that from Carey's characteristic growl many locals called the tune Play Jack Carey. Jelly Roll Morton also claimed to have written the tune, basing part of it on his jazzed up version of an old French quadrille. While the exact details are unclear, it seems that at least something similar to Tiger Rag or various strains of it were played in New Orleans before the Original Dixieland Jass Band recorded it.

After the success of the Original Dixieland Jass Band recordings, the tune gained national popularity. Dance band and march orchestrations were published for the benefit of bands that couldn't get the hang of the new "jazz" music. Hundreds of recordings of the tune appeared in the late 1910s and through the 1920s. Among the more notable is the New Orleans Rhythm Kings version with a clarinet solo by Leon Roppolo. The Tiger Rag became a standard, with over 136 cover versions by 1942 alone. Famous artists who covered the song included Art Tatum, Benny Goodman, Frank Sinatra (in a version with lyrics),Duke Ellington, Bix Beiderbecke, and Louis Armstrong.

Tiger Rag is often used as a fight song by several American high school and college teams with a tiger as their mascot.