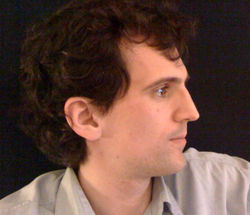 This cycle is a setting of three contrasting poems by Latin-American poets Leopoldo Lugones, Ruben Dario, and Jose Marti. Olas Grises uses evocative rain and sea imagery to meditate on the nature of life and death. Set as a lyrical, quasi-strophic song, these images are portrayed through the opening percussion rain drop motive and the moaning vocal line used throughout the movement. Nocturno is a frantic soliloquy set as an extended opera scene. The piano and percussion accompany the soprano in the opening recitative which is followed by a surreal aria accompanied by the rest of the ensemble. This is followed by a re-statement of both sections.

Sueño Despierto is a short poem about the contrasting images of a waking dream. Based on a fragment of the lullaby Nanita nana, heard in its entirety at the opening, the song is a set of three variations, followed by a coda, which portray these various images.

Three Spanish Songs was commissioned by Michael Haithcock and the University of Michigan Symphony Band.