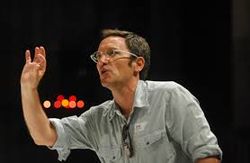 Night of the Flying Horses starts with an Yiddish lullaby that I composed for Sally Potter's film The Man Who Cried, set to function well in counterpoint to another important music theme in the soundtrack: Bizet's Aria Je Crois Entendre Encore, from The Pearl Fishers. In her film Sally explores the fate of Jews and Gypsies in the tragic mid-years of the 20th century, through a love story between a Jewish young woman and a Gypsy young man. The lullaby metamorphoses into a dense and dark doina (a slow, gypsy, rubato genre) featuring the lowest string of the violas. The piece ends in a fast gallop boasting a theme that I stole from my friends of the wild gypsy band Taraf de Haïdouks. The theme is presented here in a canonical chase between two orchestral groups.

A dead man in Spain is more dead there than anywhere else," said García Lorca, explaining that Spanish poets define rather than allude. Lúa Descolorida (Colorless Moon) a poem by Lorca's beloved Rosalía de Castro written in Gallego (the language of the Galicia region in Spain), defines despair in a way that is simultaneously tender and tragic. The musical setting is a constellation of clearly defined symbols that affirm contradictory things at the same time, becoming in the end a suspended question mark. The song is at once a slow motion ride on a cosmic horse, an homage to Couperin's melismas in his Lessons of Tenebrae, and velvet bells coming from three different churches. But the strongest inspiration for Lúa Descolorida was Dawn Upshaw's rainbow of a voice, and I wanted to give her music so quietly radiant that it would bring an echo of the single tear that Schubert brings without warning in his voicing of a C major chord. The original version of this song was commissioned by the Barlow Endowment for Music Composition and premiered by Dawn Upshaw and Gilbert Kalish in April 1999.

How Slow the Wind, a setting of two short Emily Dickinson poems, was Golijov's response to the death in an accident of his friend Mariel Stubrin. He writes, "I had in mind one of those seconds in life that is frozen in the memory, forever -- a sudden death, a single instant in which life turns upside down, different from the experience of death after a long agony." Originally for voice and string quartet, the piece was commissioned by Cecilia Wasserman, in memory of her late husband Herb, for Close Encounters with Music and was first performed in their Seiji Ozawa Hall concert of May 5, 2001, by Dawn Upshaw, soprano; Toby Appel and Justine Chen, violins; Kenji Bunch, viola, and Yehuda Hanani, cello.