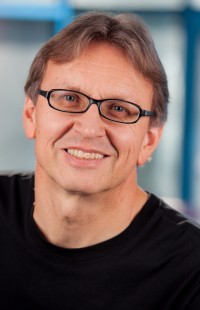 Austrian-born composer Gernot Wolfgang employed similar techniques more than a decade after Wilson’s psychological foray in a duo for viola and bassoon. The wind ensemble version of Three Short Stories grew from that idiosyncratic beginning. The notes in the score elaborate.

The first movement, Uncle Bebop, is an up-tempo romp that switches back and forth between jazzy, slightly swinging elements and rock-oriented passages. The movement settles down briefly in a short quiet section before picking up speed again before returning to the opening material for an energetic finish.

Rays of Light is lyrical in character, and presents many of the ensemble’s instruments in soloistic, often unaccompanied, settings. A few interspersed ensemble passages, their instrumentations growing in size as the movement progresses, pave the way for a final, regal tutti ending.

The title of the third movement, Latin Dance, already gives away its character. This is a fast, lively piece of music, exploring rhythms found in Latin American music while using a slightly dissonant melodic and harmonic language.

Various versions of Three Short Stories have been described by critics as “... a marvelous neoclassical procession as adventurous as a Miro painting” and, "... although there are many nods to jazz, folk and Latin music, the influences come across as partners to Gernot Wolfgang’s creative individuality -- the repertoire embraces everything from puckish humor and jubilance to haunting modernism and lyrical radiance. Wolfgang is especially inventive in frisky and poetic material ..."