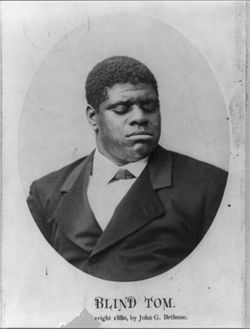 Wiggins was born the child of slaves, owned by General James Neil Bethune, a Georgia lawyer and newspaper editor.His name was variously reported as "Thomas Greene Bethune", "Thomas Wiggins", or "Thomas Bethune"; the name was changed due to his slave status.

Because Tom was blind from birth, he was left to play and explore the Bethune plantation. At an early age, he showed an interest in the piano. By age four he reportedly had acquired some piano skills by ear, and was given access to the piano. By age five Tom reportedly had composed his first tune, The Rain Storm, after a torrential downpour on a tin roof. With his skills recognized by General Bethune, Tom was permitted to live in a room attached to the family house, equipped with a piano.

Bethune hired out "Blind Tom" from the age of eight to concert promoter Perry Oliver, who toured him extensively in the U.S. General Bethune's family eventually made a fortune estimated at $750,000 at the hands of Blind Tom. Bethune also hired professional musicians to play for Tom, who could faithfully reproduce their performances, often after a single listening. Eventually he learned a reported 7,000 pieces of music, including hymns, popular songs, waltzes, and classical repertoire.

In 1860, Blind Tom performed at the White House before President James Buchanan, the first African-American to give a command performance at the White House. Mark Twain attended many of Blind Tom's performances over several decades and chronicled the proceedings. During the 19th century, he was one of the best-known American performing pianists and one of the best-known African-American musicians.

Wiggins had numerous original compositions published. Although he lived and died before autism was described, he is now regarded as an autistic savant.