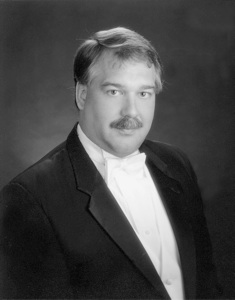 Thomas Stone (b. 3 October 1957, Oshkosh, Wisc.) is an American composer, educator and conductor.

Mr. Stone studied at Lawrence University (Bachelor of Science, 1979) and De Paul University (Master of Education). He first taught instrumental music at the Latin School of Chicago, where he established a wind program in the upper school. During the summer of 1988, he was conductor and composer-in-residence at the Saskatchewan (Canada) School for the Arts.

In 1989, he was appointed director of bands at the Bolles School in Jacksonville, Florida. He left that position in 1992 to pursue doctoral studies in wind conducting at the College-Conservatory of Music at the University of Cincinnati with Eugene Corporon. In 1991, he was the first chairman of the board of directors of the newly-formed First Coast Wind Ensemble, a performing organization which serves the arts community of northern Florida.

Stone’s first two published works for band, Shadows of Eternity and Mentor, were selected by the Yamaha Corporation of Japan for its list of 100 Best Compositions for Band in 1992 and 1993, respectively.