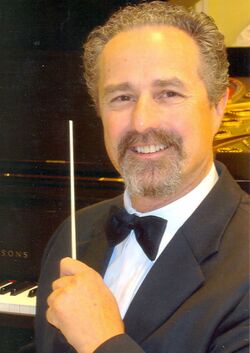 From the age of 7 he began to study the piano, two years later switching to the trumpet, and finally chosing the tuba as his primary instrument. For a while he played the tuba in the U.S. Air Force Band.

Dr. Dollarhide studied at Santa Rosa Junior College, San Jose State University (Bachelor of Arts with honors, 1974) where he studied with Higo Harada, and the University of Michigan (Master of Music, 1976; Doctor of Musical Arts, 1981). All his degrees are in the field of musical composition. Among his teachers were Leslie Bassett, George Balch Wilson, and William Bolcom.

Dollarhide spent the years 1979-1980 in Paris on a Fulbright fellowship to study composition with Eugene Kurtz. He then taught composition and analysis at La Trobe University in Melbourne, Australia, (1981-1989) and was visiting professor of composition at Yonsei University in Seoul, Korea (1989-1991). In 1991, he returned to his native Santa Rosa, where he was named composer-in-residence and personnel manager of the Santa Rosa Symphony.

Dollarhide’s early compositions show the textural influences of Kristoff Penederecki, George Crumb, and Luciano Berio. Music for the Food King, Jupiter, and Faces at the Blue Front date from this period. Later works were influenced by an environment, i.e., written for players or situations of premier performances. His more recent works center around the use of the Fibonacci number series as used in the music of Claude Debussy. Cloudy Skies over Moonee Ponds dates from this most recent period.