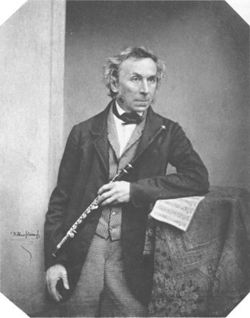 Boehm learned his father's trade of goldsmithing. After making his own flute, he quickly became proficient enough to play in an orchestra at the age of seventeen, and at twenty-one he was first flautist in the Royal Bavarian Orchestra. Meanwhile, he experimented with constructing flutes out of many different materials -- tropical hardwoods (usually Grenadilla wood), silver, gold, nickel and copper -- and with changing the positions of the flute's tone holes.