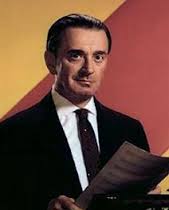 During the waning years of World War II, Rózsa established himself as one of the most sought after composers in Hollywood and wrote music for films directed by the biggest names in the industry. He composed the scores for Alfred Hitchcock’s films Double Indemnity in 1944 and Spellbound in 1945, the latter of which earned him an Academy Award.

Even with his success in film composing, Rózsa continued to write music for the concert stage. These works revealed the strong influence of his Hungarian upbringing and the ever-present sounds of his native country’s folk music. Like countrymen Béla Bartók and Zoltán Kodály, Rózsa avidly studied the performances of the indigenous folk musicians and spent a great deal of his youth writing down their distinctive melodies in a little notebook. He wrote in his memoirs:

It was [this] music which intrigued me from early childhood, although of course it wasn’t until later that I realized what a vital shaping force it was proving on my whole musical personality. This music was all around me; I’d hear it in the fields when the people were at work, I’d hear it emanating from festivities in the village as I lay awake at night; and the time came when I felt I had to put it down on paper and perpetuate it.

These folk elements permeate Rózsa’s Theme, Variations, and Finale, which he slightly revised the year after its composition in 1933. The piece begins with a solo oboe sounding a plaintive Hungarian-influenced melody that came to the composer as he was saying farewell to his family prior to his departure from Budapest to settle in Paris, which would turn out to be the last time he saw his father. The theme then progresses through a series of eight diverse and inventive variations before culminating in a dramatic symphonic finale.

Not only did this tour de force for the orchestra put Rózsa firmly on the map in the international classical music community, it was also partly responsible for doing the same for a young Leonard Bernstein. Among the works on the last-minute 1943 concert that launched Bernstein’s conducting career was Rózsa’s Theme, Variations, and Finale. This transcription for symphonic band was made especially for the Marine Band by Music Production Chief and Staff Arranger Master Gunnery Sgt. Donald Patterson.