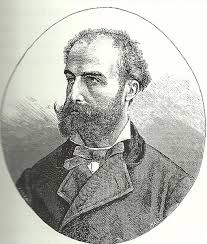 Descendant of Irish merchants and military father, Power demonstrated very young his extraordinary ability with piano and as a composer. He was a child prodigy who surprised the intellectuals of the time. He moved to Barcelona, where he was a disciple of composer Gabriel Balart, and Paris to make his musical studies, concluding at just 18 years of age.

Then began his meteoric career that took him through Tenerife, Cuba, Madrid, Lisbon, Madeira, and Malaga. Among these trips and because of his poor health, Power spent some time in his native Tenerife, specifically in the town of Las Mercedes, where he composed the Cantos Canarios. The premiere of this work occurs in August 1880. Since that time it has stood as a symbol of the musical identity of the Canary Islands.It is now established as Hymn of the Canary Islands.

In 1882 Power took up the chair of piano at a music school in Madrid, and also was an organist at the Royal Chapel. He died at only 36 years of age from tuberculosis.