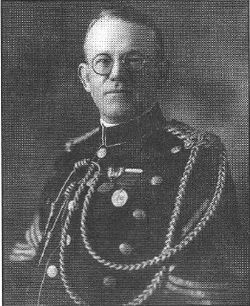 He was educated in the public schools of Washington, and his music education was gained largely with musicians of the U.S. Marine Band. As a boy, he studied violin under Captain William H. Santelmann, then leader of the Marine Band. He studied clarinet with Andrea Coda, solo clarinetist of the band, and composition with Arthur Tregina, another member of the band.

Branson enlisted in the Marine Band as a private at the age of 17 in 1898, just before the close of the Spanish-American War. He was solo violinist with the Marine Band Symphony Orchestra for over 20 years and was promoted to second leader in 1921. He was appointed leader of the Marine Band in 1927.

Branson was a pioneer in the field of radio orchestration. Experimenting with various instrumentation, he learned that the smaller groups necessary to make good phonograph records in those days were insufficient for radio. The Marine Band played weekly concerts over radio station NOF at the Naval Station in Anacostia, D.C., and the young announcer on the show was the future television star, Arthur Godfrey.

Branson composed a series of marches dedicated to the Marine Corps and was elected to membership in the Gridiron Club of Washington, D.C., whose orchestra he led for over 25 years. He received many honors and commendations, not only from the government of the United States but from the governments of several foreign countries as well. He also conducted the premiere of Gustav Holst’s Hammersmith: Prelude and Scherzo in 1932 at the American Bandmasters Association meeting in Washington, D.C.

Branson retired as leader of the Marine Band in 1940.