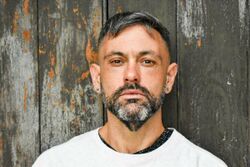 Tanner Menard (b. 20 September 1978) is an American composer and poet.

At the age of 11, Menard composed his first works for piano and has since explored minimal sound worlds in myriad contexts that are bound by a central poetic understanding of sound. For nearly 20 years he has composed and curated experimental sound works and installations both for electronic media and orchestral ensembles.

Menard's current work embodies his mestizo Indigenous and French lineage. Poems are his method of survival, a linguistic medicine of ambiguity which is certain that love prevails. His poetry is the DNA of his queer hybridity, a double helix of gender and identity. As a composer of experimental music, Menard has been published and anthologized in the U.S., Canada, Europe, and Japan.

Menard’s work has also appeared on the radio, on TV, in plays, at art galleries, festivals, spiritual centers and in major concert halls across the world. In 2005 Menard served as an artist in residence at Arizona State University where he collaborated with Jeph Jerman, Gary Hill, and Daniel Bernard Romain for his installation “Envyronie”. Menard is rapidly becoming known for recreation of Robert Rich's Sleep Concert with Chika Iijima and Jeremy Bible and has lulled audiences to sleep with sounds from over 100 artists from all over the globe.

He currently serves the Snake Band Tribal Councilman for the Atakapa-Ishak Nation of Southwest Louisiana and Southeast Texas.