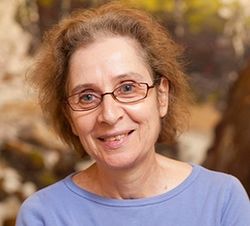 Tamar Diesendruck (b. 1946, Tel Aviv, Israel) is an Israeli-born American composer and educator.

Dr. Diesendruck earned her MA and Ph.D. from the University of California, Berkeley and her BA from Brandeis University.

Tamar Diesendruck writes virtuosic chamber music, including orchestral, choral, wind ensemble, and vocal works. Her music is often characterized as having a wide range of expression. Her works from the 1990s found common ground between disparate musical cultures, but more recent works avoid references: passages of guided freedom for players are incorporated to produce complex webs and networks of sound. Fashioned from layered fragments of intense individual “utterances” performed simultaneously or bunches of small gestures that resemble each other, varied musical spaces emerge, lines branch and wander, eddies and currents form.

Diesendruck’s works have been performed by ensembles and soloists in Asia and the Middle East and throughout Europe and the United States. Her honors include a Guggenheim Fellowship, the Rome Prize, commissions from the Fromm Music Foundation and the Koussevitzky Music Foundation, and three awards from the American Academy of Arts and Letters.

Dr. Diesendruck is on the faculty at the Berklee College of Music.