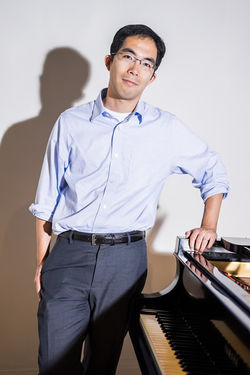 Takuma Itoh (b. 1984, Japan) is a Japanese-American composer and educator.

Takuma Itoh spent his early childhood in Japan before moving to Northern California where he grew up. Itoh holds degrees from Cornell University, University of Michigan, and Rice University. His past teachers include Steven Stucky, Roberto Sierra, William Bolcom, Bright Sheng, and Pierre Jalbert.

With music described as “brashly youthful and fresh” by The New York Times, Takuma Itoh is one of the most “up and coming” composers of our time. Itoh was featured as one of “100 Composers Under 40” on National Public Radio, and he has been the recipient of numerous awards and commissions.

Itoh currently serves on the faculty of the University of Hawaii at Manoa.