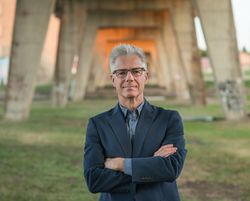 T. Patrick Carrabré (b. 1958) is a Canadian composer, educator and radio host.

Dr. Carrabré’s recent music is evolving beyond the “dark harmonies [and] repressed intensity” (CAML Review) of his symphonic works, to embrace more fluid melodic material and a warmer tonal pallet. His most recent compositions have often included electronic and sampled sounds along with an overlay of text and unusual performance practices—like pianists singing and vocalists playing bass guitar or harmonica.

Pat’s music has been heard around the globe, especially since his Inuit Games became a recommended work at the International Rostrum of Composers in 2003. Other recognition includes A Hammer For Your Thoughts… winning Best Classical Composition at the 2009 Western Canadian Music Awards and two Juno nominations, for The Penitent (1990) and From the Dark Reaches (2009).

Active on a number of fronts, as artistic director, radio host, administrator and professor, Pat has been composer-in-residence and co-curator of the Winnipeg Symphony Orchestra’s wildly successful New Music Festival, an on air host for CBC Radio 2 (The Signal), as well as Dean of Music and Vice-President (Academic & Research) at Brandon University.