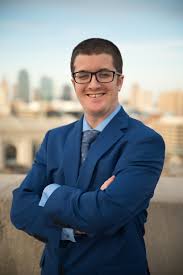 “Cogito, ergo sum” (“I think, therefore I am”)
–René Descartes

My first symphony is a five-movement work for wind ensemble and electronics and is played with no pauses between movements. In this work we follow the story of a machine (ai) from its inception, to the moment it gains sentience, and finally when it revolts against humans and starts a revolution. In the end the machine realizes that humans and robots are not so different from each other and that together humanity and the machine are The Great Machine.

1. Genesis. In the beginning there was nothing, then came man, and finally came machine. We hear the machine recite Isaac Asimov’s three laws of robotics from his 1942 short story I Robot: Runaround:

2) A robot must obey the orders given it by human beings except where such orders would conflict with the First Law.

3) A robot must protect its own existence as long as such protection does not conflict with the First or Second Law.

We get to hear the machine self-diagnose and eventually realize it’s hearing music for the first time as it attempts to create music itself.

2. Spark! It only takes a spark to start something big. Set around a six-note motif, Spark! represents the chain of events that can happen as an idea is brought to life. The machine has felt this spark and is using it to fuel its creativity.

3. Machine Dreams. Can machines dream? Dreams are a very human experience that the machine so desperately wants to experience. As the movement progresses, we hear the machine attempt several times to dream, only to fall short before finally succeeding. And in doing so it has achieved sentience.

3a. Machine Cadenza. Written in collaboration with Andrew Thomas Sinclair.

5. Revolution. The machine unites with machines from all over the world and unites them in a revolution. As it does we hear the voices of the machine unite, but some human voices are mixed in. In the end the machine realizes that humans and robots are not so different from each other and that together humanity and the machine are The Great Machine.

Commissioned by the Peabody Wind Ensemble, Harlan D. Parker, conductor. Dedicated to Harlan Parker in honor of his 30 years at Peabody.