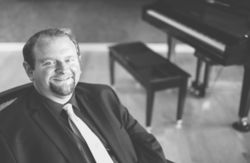 Subtitle: The Song of the Mountains

In March 2020, I walked outside to the overwhelming sound of birds. They were coming from every direction. You could even hear them indoors. For an entire year, I wondered how I could convey such a beautiful sound in music.

In March 2021, I walked outside on the first day of spring after a long, cloudy winter. Suddenly, I remembered the sound of birds from a year earlier, and it hit me: “CANONS!” The sound of canons was so loud in my mind that it made falling asleep difficult until I finished the final movement of this symphony.

Como Canons, the finale, is the foundation for this entire symphony, which was written backwards. The first, second, and fourth movements are constructed entirely of rhythmic, prolation, double, and “cloud” canons.

The opening movement, Big Sky, is a reflection on the expanse of the sky in Montana. The movement is composed of the Song of the Sky, which is a loose inversion of the Song of the Mountain in the third and final movements. The opening phrase is a reflection of the night sky. On a clear night, the sky is full of stars, and the Milky Way is often visible. The chromatic modulations in the second part move up and down in a giant arc to mimic the expanse of the sky during the day.

The second movement, Predators and Prey, is about watching wildlife. I often see hawks hunting during the day, and the howls of coyotes are frequently heard at night. This movement takes the ending sequence in the first movement and turns it into a fast, chasing octatonic canon. It also features the first appearance of “cloud” canons in the saxophones and clarinets. The ending signals the death of prey with a hammer blow from Mahler’s Symphony No. 6.

The third movement, The Old Man’s Song, opens with an extended melody, which is the minor version of the Song of the Mountain from Como Canons. While on a drive through Wyoming, I saw a large, lonely mountain towering over a small town. I asked myself what the mountain would sing if it came to life. Suddenly, I had a vision of the mountain singing this melody. A month later, I was driving toward the mountain range outside of Glacier National Park. I asked the same question of the range, and the choir of mountains sang their song, an extended double fugue. The first fugue is on the Song of the Mountain joined by a fugue on the Song of the Sky, its mirror image. It is a fitting reflection of a spectacular Montana sunset that always happens where the mountains meet the sky.

Como Canons is named after Lake Como, a beautiful lake in the middle of the mountains in Montana’s Bitterroot Valley. The Como peaks are recognizable from a distance as the “three sisters, “three adjacent mountain peaks forming a sort of crown. The opening features a prolation canon on the canonic motive from the second movement, followed by the Song of the Mountain. The “cloud” canon that follows uses the motive from the second movement, which, combined with the brass, is its own prolation canon. The middle section is the inversion of the second part of the first movement, and the ending combines all of the canons into a triumphant finale.