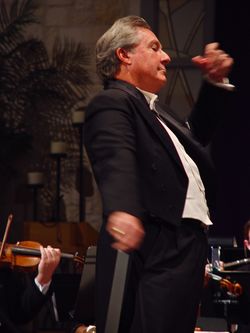 When I was serving as associate first horn in the U.S. Air Force Symphony Orchestra and Band, in Washington, DC, I frequently had the occasion to perform authentic background music in one or other of the famous hotels where political dinners were held. It could be quite interesting, as on one occasion when I was able to observe a vibrant conversation between Harry S. Truman and John F. Kennedy, but at the same time I never forgot that I was not a guest but rather an anonymous, unseen musician in the balcony. And against this ignominious status the performance often required considerable skill, as performing quantities of Strauss waltzes I had never heard with no rehearsal.

All this came to mind one bitterly cold day in Vienna when, late at night, I saw a solitary horn player, poorly dressed for the weather, struggling in the face of the strong wind with his horn case on his back. This poor musician had no doubt been performing some festive music at the Hofburg, helping provide entertainment music for the aristocrats of Vienna who were now riding home in their chauffeured limousines. It was thinking of him that brought this music to the surface: the “dark side” of the Viennese waltz. The two movements are a continuous development of a single theme.