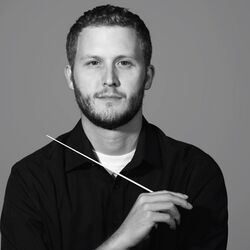 1. Jackson Square. This opening movement is a depiction of New Orleans before the storm. We begin with street music in Jackson Square, which is a central gathering place in the French Quarter. The brass section, building incrementally from low to high, introduce the hymn tune Nettleton, which is commonly sung to the text "Come thou Fount of Every Blessing." The percussion, and woodwinds join the sound through interjections, as if more musicians are coming to the square to join in the fun. The music then shifts as a funeral procession enters the square. The traditional Dixieland band of trumpet, clarinet, trombone, tuba, and drums plays a slow and solemn dirge, which is followed by the whole ensemble joining in that mournful song. Then, in keeping with the tradition of a New Orleans funeral, the band kicks off the up-tempo second line rhythm and everyone marches home for a joyous celebration of life. An original melody, which will return in the final movement, is combined with the familiar tunes of "Oh When the Saints" and "Swing Low, Sweet Chariot" to bring the movement to an uplifting close.

2. Storm. On August 29, 2005, Hurricane Katrina slammed into the U.S. Gulf Coast. This is my attempt to conjure up that storm. Blistering unison lines are passed back and forth between woodwinds and brass and then the low woodwinds play a foreboding melody that is the same as the blistering melody, but augmented into longer note values, as if the storm is approaching from a distance. Then the musical tension increases through heightened chromaticism, frequent key changes, and increasingly contrapuntal textures. Fragments of the hymn tune Nettleton, which we heard in the first movement, are heard multiple times, each time more desperate. Finally, the chaos and confusion in the music surges to a climactic and dramatic pause. Then the music bursts forth with destructive power, breaking through the levees and engulfing the city with water. The music dissipates, the storm is over, but the city is devastated.

3. Lament. This music represents the pain, despair, and disillusionment of the city in the wake of the storm. The melodic material at the beginning of this movement is derived from fragments from the funeral procession from the first movement and from the storm melody from the second movement. Mournful solos by the euphonium, french horn, and soprano saxophone lead us into another statement of the Nettleton hymn tune, this time transformed into a minor key. Finally, the movement ends with the low brass and woodwinds playing repeated descending chords while the "heartbeat" that is played by the piano slows down separately from the rest of the ensemble and dies away.

4. Play! A simple tune emerges from the silence. The music grows. The vibrant city is being rebuilt. We hear the rhythms of the second line. The musicians are returning to Jackson Square. This time, to celebrate new life!

Come, thou Fount of every blessing,
tune my heart to sing thy grace;
streams of mercy, never ceasing,
call for songs of loudest praise.


Teach me some melodious sonnet,
sung by flaming tongues above.
Praise the mount! I'm fixed upon it,
mount of thy redeeming love.