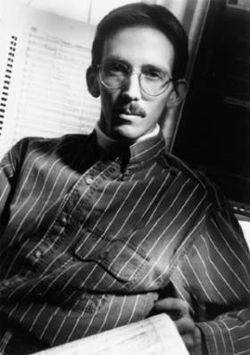 Symphony No. 1 by Donald Lee Gannon is a relatively unknown gem in the wind band repertoire. The work received its world premiere by The University of Texas Wind Ensemble on October 25, 1993 conducted by Jerry Junkin. The composer was in attendance at the premiere and made the following remarks...

I'll say just a word or two about the piece. This is my first symphony. Well, gee, what can you say about a symphony? A symphony, to me, should be a substantial piece. It should have something to say. So many of my works have been programmatic in nature and fairly specifically programmatic, but this piece is not so much that way. It is more of a summation of feelings that I've been through, throughout my life up to this point. And believe me when I tell you my life is rather colorful. I won't go into any details, but just trust me.

Other than that, I don't know what to tell you to listen for except to mainly reflect on your own lives and think about what you've been through and maybe that will help. Once again, I want to thank you all and this is probably the most wonderful moment of my life, so thank you!

Gannon told Richard Clary, former conductor of the University of Kentucky Wind Ensemble, that the symphony symbolized a capsulation of his emotional reaction to the news when he was first told he had contracted the HIV virus. According to Clary, "the piece begins with the label 'Proudly' which reflects Gannon's emotional stress when he is forced to "face the music" if you will, and quickly disintegrates into tumbling chaos at the stunned realization of the gravity of his predicament. I remember him speaking of being numbed, dumbfounded, and panicked all at the same time. Richard Clary, who is now at Florida State University, has offered the following commentary:

The programmatic motivation of the work provides compelling emotional empathy for the interpreter and performers. Lee was one of relatively few composers at his level of recognition that grew up actually playing in bands and wind ensembles (as a flute/piccolo player) and thus brings extra insight as a composer of wind band music through his personal familiarity with both the medium and its repertoire. In purely practical terms, the final section of the work contains what I believe to be some of the most beautiful and inspiring moments in our repertory.