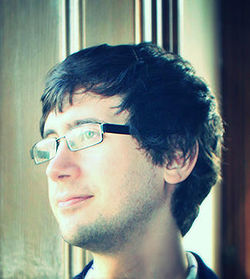 In undertaking such a formidable task as writing a symphony, a composer is inviting audiences and performers to be judged on how well the structural complexities so inherent in this genre have been handled. I chose to write a symphony that had no initial narrative to it - my previous large-scale works for band having been influenced, or at least guided, by programmatic elements - so in this way the music had only the form itself to rely on. Structurally, the piece owes much to English symphonists such as Walton and Elgar but also Bax, a composer whose developmental style I empathised with strongly.

The symphony is in the traditional four movements, with the first movement being cast in sonata form. This decision was made in order to focus the musical material and not allow too many chances to deviate from the main symphonic argument.

The principal themes of the first movement are all presented in the slow introduction. The first subject is actually made up of two separate motifs; the first a small falling interval followed by a rising one, while the second is played by the brass as a kind of brief chorale melody. The music winds itself up into a fast compound time. Here these two melodic ideas are developed. This then subsides into the second subject, a more lyrical melody first heard on clarinets. The pulse is the same but the notes and phrases are longer; this leads into a faster development section marked agitato. The themes cascade over one another, reaching a climax which is then followed by a truncated recapitulation. The two subjects are revisited again with the fast pulse remaining to the end of the movement.

The second movement is an energetic scherzo in modified ternary form with much syncopation and more angular melodic lines, but always with a sense of humour. The three-note motif in the first bar constantly interrupts newer material later on. After a more thinly-scored section the brash music returns to close the movement with more abandon than before.

The rhapsodic third movement introduces its main theme - a short alternating succession of major and minor thirds, itself related to the second subject from the first movement - with thin textures. Soprano saxophone and alto flute are the primary voices initially. The music reaches a heavy climax, emphasised by the first entry of the thunder machine (a drum filled with heavy metal balls which roll around when turned), then dies away to a melancholic close.

For the finale of any symphony, composers are seemingly always up for criticism as to what form this movement eventually takes. I decided to write a march: instead of a potentially clichéd 'band march' in the standard ternary form, the movement is in modified rondo form. The ending revisits the chorale idea as well as re-interpreting material from the introduction in the first movement and is celebratory in nature.