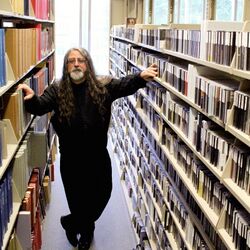 During my teaching career in the Butler University School of Music, I have greatly enjoyed the concerts of the wind ensemble and other bands, first under Dr. Robert Grechesky, and now under Col. Michael Colburn. Its performers are marvelous, and the range of music they play is far-reaching, both in style as well as difficulty.

Sunrise at Angler’s Roost was composed to honor the Butler Bands on its 100th Anniversary, but takes a different approach for this celebration, rather than using more obvious Butler-related music or subjects. Both of the aforementioned directors, Dr. Grechesky and Col. Colburn, are euphonium players, as was my high school band director, Scott Southwick (who also taught me to play euphonium as my primary “band” instrument). Consequently, I wanted to write a piece featuring our instrument in a solo capacity, as part of an uncomplicated, lyrical, accessible work that celebrates not only these wonderful colleagues and friends but also hearkens back to the beginning of my musical journey in the Bitterroot Valley of Western Montana.

Angler’s Roost is located south of Hamilton, Montana where US Highway 93 crosses over to the west side of the Bitterroot River. While there are cabins and a bait and tackle shop there, it is also a pretty typical but very beautiful part of the river bottoms: cottonwoods, birches, willows, firs, and pine trees crowd its banks, and water-rounded rocky beaches and downed trees surfacing in the many channels of the river. This river system never fails to move me when I am there, and I greatly miss it when I am away.

This work was commissioned by the Butler University Wind Ensemble and composed for them and their director, Col. Michael Colburn in honor of the band's 100th Anniversary. It is dedicated to Scott and Colleen Southwick.