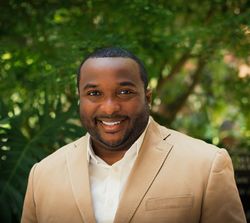 While an undergraduate music student at Florida A&M University, the composer had the honor of performing for presidential candidate Barack Obama on several occasions, the first being in Tampa in the spring of 2006. Obama was running in the middle of the Democratic presidential field as a relative unknown in Florida. After performing for, and standing behind, Obama on stage during his 45-minute speech, band members enthusiastically discussed on the band’s ride back to Tallahassee. Subsequent performances for Obama left Wilson and colleagues with a feeling of hope that they might be alive to see the first President of the United States of African American descent.

The inspiration for creating this work came while watching President Obama depart the Oval Office for the final time on inauguration day. As he walked out of the office, Wilson thought, “I could write a piece based on the swag in his walk.” Ideas came quickly to form a full suite.

Suite Forty-four is based upon the composer’s perception of, and admiration for, America’s 44th President. Each of the suite’s five movements has a distinct character and emotion.

Movement one gives a sense of mystery and wonder, asking the question, “Who is this man?” as he begins his climb in the ranks towards the Democratic nomination.

Movement two evokes someone ethical, pure, and upright, a role model and champion with the personality of a down-to-earth leader.

Movement three represents the “cool” personality of President Obama with a jazz-like structure that serves as reflections of the active jazz community in his hometown of Chicago, Illinois.

Movement four has a distinctive feel of unrest and turmoil, as President Obama dealt with adversity in the form of offensive comments and parodies, difficult questions about his background, and harsh statements directed toward his family.

The fifth (final) movement is a culmination of the four previous movements, a composite image of his time as the 44th President of the United States of America.