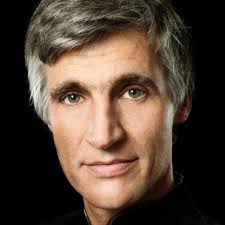 The title of this is intentionally capitalized subZERO.

This work was written for New York City freelance bass trombonist David Taylor and the Absolute Ensemble in May of 1999. This Concerto is an expansive work set in three movements, incorporating traditional and contemporary performance techniques.

Critics like to talk about the “fusion” of classical music, world music and jazz; but in the case of Daniel S Schnyder, what we have is no longer “fusion” of different styles but rather an unquestionable unity of style elements that may be different in origin but can no longer be separated. A composer and virtuoso saxophonist, Schnyder recognizes no inner boundaries whatsoever in the realm of music, and writes his music for colleagues and friends who feel the same way he does.

Schnyder, a native of Zurich, Switzerland, is a long-time resident the United States, and American traditions play a crucial role in his music. He is extremely prolific in all genres, but has been especially successful with his works written for brass instruments. His Grammy-nominated concerto for bass trombone, subZERO, was written for David Taylor, an artist who is also at home in every style. Many of the fundamental gestures of this music derive from jazz, but the harmonic language is that of a composer who is thoroughly versed both in European high modernism and American minimalism; the overall form, full of interruptions, contrasts and other surprises, is also “classical.”

The concerto is in the traditional three-movement form (fast-slow-fast), and the orchestra is an equal partner of the soloist in every respect. Individual players or instrumental groups frequently join the solo trombone in virtuoso “licks” and the piano and percussion parts are especially important.

The second movement, titled Sama’i Thaqil, is named after an Arab instrumental form based on a metric pattern of ten beats. After an introduction where the oboe and the English horn play a duet of a distinctly Middle Eastern flavor, the sama’i proper begins: the very low notes of the bass trombone are set against the extremely high pitches of the solo violin, over the accompaniment of a set of drums played with bare hands. As in Arab music, the underlying rhythmic pattern is embellished by more and more melodic activity by both soloist and orchestra, until they all come together in a resolute unison melody at the end of the movement.

The brief last movement is a wild romp that contains some extremely fast runs for the trombone, but the entire orchestra gets a workout as well.