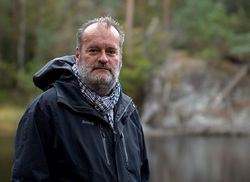 Nordhagen started playing clarinet as an 8-year-old in his local school corps. From the age of 12, he began taking playing lessons with Richard Kjelstrup, who at the time was Norway's leading educator and former solo clarinet in the Oslo Philharmonic Orchestra. This was followed by studies at Eastern Norway's Conservatory of Music with Tove Bratbak as teacher and diploma studies with Prof. Walter Boeykens in Rotterdam. In parallel with this, he had Yngve Slettholm and Kjell Habbestad as teachers in composition.

The same year that Nordhagen graduated from Rotterdam (1994), he got a job in the Armed Forces 'music corps Sørlandet, one of the Armed Forces' seven military corps. From 1994, Nordhagen also got a position in Kristiansand Symphony Orchestra, and the teaching position at Agder Music Conservatory now UIA (University of Agder).

From 2003, Nordhagen has been employed as a solo clarinet in the Kristiansand Symphony Orchestra. He has, on several occasions, been a soloist with the Kristiansand Symphony Orchestra in works by Mozart, Williams and Bassi. Nordhagen is also an avid chamber musician and has played in many different chamber ensembles that have toured both in Norway and Europe.

Nordhagen also has a large catalog as a composer and arranger. A test piece for the European Championships for brass bands in 2013 and commissioned works for the youth symphony orchestra's 40th anniversary can be mentioned.

Nordhagen has taught music history and work analysis in addition to clarinet, composition and movement theory, which he now teaches.