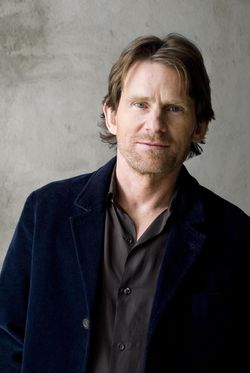 Steven Mackey (b. 14 February 1956, Frankfurt, Germany) is an American composer, guitarist and educator.

Dr. Mackey is regarded as one of the leading composers of his generation and has composed for orchestra, chamber ensembles, dance and opera. His first musical passion was playing the electric guitar, in rock bands based in northern California. He blazed a trail in the 1980's and 90's by including the electric guitar and vernacular music influence in his concert music. He regularly performs his own work, including two electric guitar concertos and numerous solo and chamber works. He is also active as an improvising musician and performs with his band Big Farm.

Mackey's orchestral music has been performed by major orchestras around the world, from the Los Angeles Philharmonic, San Francisco and Chicago Symphonies, the BBC Philharmonic, Concertgebouw orchestra, and the Austrian Radio Symphony, to the Sydney Symphony and Tokyo Philharmonic. As a guitarist, Mackey has performed his chamber music with the Kronos Quartet, Arditti Quartet, London Sinfonietta, Nexttime Ensemble (Parma), Psappha (Manchester), and Joey Baron.

Recent premiers include One Red Rose, for the Brentano String Quartet, commissioned by Carnegie Hall, for the 50th anniversary of the assassination of J.F.K., Stumble to Grace, his piano concerto for Orli Shaham, Urban Ocean commissioned by the Aquarium of the Pacific and TONIC, an orchestral work for the Chamber Orchestra of Philadelphia. He is currently working on a large multi-movement orchestral work co-commissioned by the Los Angeles Philharmonic, the Sydney Symphony, the National Symphony and the New World Symphony to premiere in 2015.

His opera/monodrama, Ravenshead, for tenor/actor (Rinde Eckert) and electro-acoustic band/ensemble (the Paul Dresher Ensemble), has been performed nearly 100 times and is available on a MINMAX CD. In a year-end review of cultural events, USA Today crowned the work the “Best New Opera of 1998.”

Mackey has been honored by numerous awards including a Grammy, several awards from the American Academy of Arts and Letters, a Guggenheim fellowship, Stoeger Prize from the Chamber Music Society of Lincoln Center, Kennedy Center Friedheim award and many others. He has been the composer-in-residence at major music festivals, including Tanglewood, Aspen and the Holland Festival.