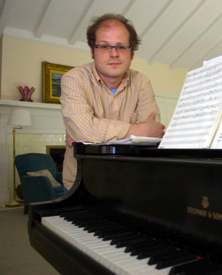 Steven Burke began his musical studies with the trumpet at age seven. In college, he divided his time between music and science. He taught college chemistry as a sophomore and was involved with neurosurgery research at New York University Medical Center. Ironically, it was nerve damage that forced him to abandon trumpet and start composing. Once he started composing, he realized his passion and since age twenty has pursued composition exclusively. He went on to earn degrees from Sarah Lawrence College, the University of Wisconsin – Madison, Yale University and Cornell University (DMA). He has studied with Chester Biscardi, Martin Bresnick, Jacob Druckman, Lukas Foss, Roberto Sierra and Steven Stucky.

Dr. Burke was on the music faculty at Sarah Lawrence College from 2000 to 2004, when he became a fellow at the American Academy in Rome.

Dr. Burke’s distinctive work has already been acknowledged by critics, and has also been singled out by several distinguished prizes and commissions including the Rome Prize and a Guggenheim Fellowship. He was awarded the Charles Ives Fellowship, as well as the Arts and Letters Award from the American Academy of Arts and Letters. He has received multiple fellowships from Yaddo, the MacDowell Colony, the Medway Institute, and an award from Meet the Composer. He was the first recipient of the Robbins Prize, and the White Flowers residency from Yaddo. He has received commissions from the Fromm Music Foundation at Harvard University, the Jerome Foundation, the National Symphony Orchestra, the St. Luke’s Chamber Ensemble, Sequitur, the Raschèr Saxophone Quartet and the Albany Symphony. He has also been commissioned by Yaddo and the Orpheus Chamber Orchestra to compose a work commemorating the centennial of Yaddo.